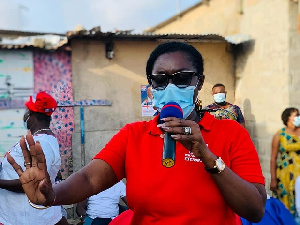 Member of Parliament for Ablekuma West Constituency Ursula Owsusu-Ekuful says women should be seen by men as their partners for development and not as competitors.

She said women were uniquely created by God to play a vital role in the building of the society, hence, their roles should not be downplayed.

Answering a question as to whether or not President Nana Addo Dankwa Akufo-Addo had done well with the number of women he has appointed so far into his government, the Communications Minister told Berla Mundi on the Women’s Factor segment on the New Day programme on TV3 Monday, November 23 that “I am the first female Minister of Communications, we have the first female Chief of Staff, Hajia Alima [Mahama] is the first female Local Government Minister.

“We have chalked a few successes but it is not enough. We can always do better. But the performance of women in leadership should give anybody comfort that when we are given a task and a duty to perform we deliver and so if people think that we are short-changing ourselves by putting women in decision making they should have a second look at that.

“I think the output of women in government, in decision making, in business, across all sectors should satisfy the Ghanaian people that we are very capable of delivering on any portfolio that we entrust into our hands.

“But, I admit some of us make mistakes. My beef is that we are held to a higher standard than the men in similar positions. Our society acts with men little slack that they do women so we are always justifying the positions that we occupy. But we are focused on getting the job done despite the distractions and we multi-task.

“We can take care of multiple issues and at the same time still keep a smile on our face despite the challenges and the stress around us. God created us uniquely and to be able to absorb a lot stress than the men do.

“They think that we are the weakest sex but we are not as weak as they assume. They do feel a little threatened by our performance in whichever position we find ourselves but I just want to assure everybody that they should see women as equal partners in the development of our country.

“We are not competing with them, we want to collaborate with them to deliver to our country.

“I keep encouraging women that if we are not in the equation, there is a lack. Society needs us more than they recognize. I also say that we should just imagine the scenario where for one week all women withdraw all services from bedroom to boardroom. Just imagine that no woman will do any work at all from the bedroom to the board room in the home to the workplace, those selling at the street sides. Would society survive? No. Nothing would happen just imagine that scenario.”