Gina Rinehart, Australia’s richest person, has lashed out at the country’s politicians for their high levels of spending in response to Covid-19 and warned the mining industry could face future tax hikes as a result.

The iron ore magnate, whose wealth is believed to have soared to A$29bn (US$21bn) over the past year due to Chinese demand for the steelmaking ingredient, also hit out at parts of the nation’s media, who she accused of viewing mining as a “dirty word” despite its economic contribution.

Politicians “take the easy road [with] each party saying ‘look what we’ve spent, or will spend’”, said Ms Rinehart, who described this as “vote-buying”.

“And guess who’s money they are spending? Their own? Of course not, it’s the taxpayers . . . which is why our taxes continue to be too high,” added Ms Rinehart, who was filmed wearing a fedora hat while sitting in front of a table laid with coffee cups and cake.

The Covid-19 crisis has blown a hole in the conservative government’s fiscal position and dashed its pledge to deliver a budget surplus this year. The deficit is forecast to hit 11 per cent in the 12 months to June 2021. But Australia is in better shape than many of its OECD partners, with its A$703bn net debt equivalent to 36 per cent of gross domestic product as of the end of 2020-21

The Australian Financial Review recently listed Ms Rinehart — who is nicknamed the “iron lady” for her tough personality and the commodity that built her family’s fortune — as the country’s richest person. Her wealth has surged to A$29bn as China’s appetite for iron ore has pushed average prices to their highest level since 2013.

Hancock Prospecting, the group founded by her father Lang Hancock in 1955 and now controlled by Ms Rinehart, reported a 55 per cent year-on-year increase in profits to A$4.07bn in the 12 months to June. 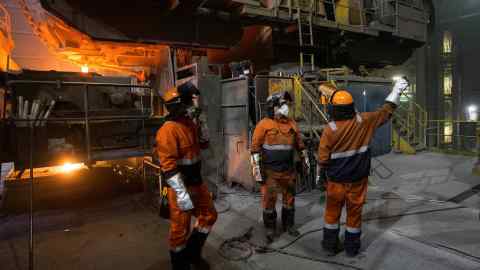 The boom for Australian miners has caused some analysts to predict that authorities could increase taxes or royalty payments by the industry to help pay for the huge costs of supporting the economy during Covid-19.

Ms Rinehart also pointed to the decision of Australia’s previous Labor government to impose a carbon tax and a mining tax in the years following the global financial crisis.

“We can’t sit on our laurels and think that if we do nothing, the double whammy won’t return in some foolish form or another to devastate our industry,” said the 66-year-old, who was one of the corporate leaders of a campaign to “axe” Labor’s mining tax.

Ms Rinehart is a controversial figure in Australia, where she has donated millions of dollars to the rightwing think-tank the Institute of Public Affairs — a promoter of climate change scepticism. She has also fallen out with members of her own family, who have taken legal action against her to gain ownership of some of the most valuable iron ore tenements in Australia’s Pilbara region.